The elephant and the rope... 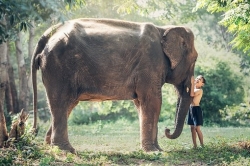 I'd like to share with you one of my favourite stories. Like all good stories it's probably apocryphal but that doesn't matter when the message is simple and clear. On this hot and humid day when your body is probably very reluctant to move just allow your mind to gently ponder the following...

One hot day as a man was passing some elephants he noticed that these huge creatures were being restrained by nothing more than a small rope tied to their front leg. He was surprised as it was obvious that the elephants could break free from their bonds at any time but for some reason they didn't.

He asked a trainer nearby why these powerful animals just stood there and made no attempt to get away. The trainer replied that when the elephants were very young, and much smaller, they were tied with same size rope which was strong enough to hold hem at that age. As they grew up they were conditioned to believe that they couldn't break away and because they still believe the rope can hold them they never try to break free.

The man was astonished. The elephants could break free at any time but because they believed they couldn't they didn't even try and stayed right where they were.

Like the elephants, how many of us go through life being held back by a belief that we cannot do something simply because we tried and failed to do it once before?